As I explained in a previous post, my latest MSX game is XRacing, a top-down racing game inspired in the classic Super Cars for the Commodore Amiga.

When I was planning XRacing, the one thing that I wanted the game to have was smooth scroll. As a Super Cars-style game, if the scroll was the usual choppy 8x8 MSX scroll, it would be very hard to play. At the end I ended up using a method for achieving this that worked pretty well! So, today I just wanted to give you an idea of how it works!

Ok, so, let's start with the basics. How do people usually implement scroll in MSX games? (MSX2 and later machines can do this by hardware, but let's forget about those for now, and focus on the classic MSX1 machines) There are basically 3 common techniques:


So, in summary "Scroll by tiles" is fast but choppy, "Bitmap-mode scroll" is smooth but slow, and "Pre-calculated scrolled tiles" is fast and smooth but reduces graphical variety. None of those options was good enough for what I wanted to do. So, I had to figure out a way to do better :)

My method is based upon the pre-calculated scrolled tiles method. So, let's start with that. To illustrate all the concepts, I'm going to be using the actual graphics I used for the "grass" type of tracks in the game (there are two separate types of tracks: tracks with a grass background, and urban tracks with buildings). This is one of the first Formula 1 tracks in the game, called "St. Junipero" (named after my favorite Black Mirror episode :)): 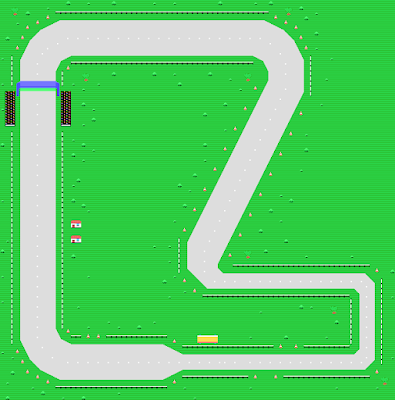 Note that this is NOT how the track looks in the game, since I use a lot of sprites to add details to the track, but let's focus just on the tiles for now :) To author that track, this is the set of tiles I wanted to use:

Notice that there are only 51 different tiles used. It seems like there aren't that many, right? Well, you'll see that 51 is quite a large number for the "pre-calculated scrolled tiles" approach. Suppose that we wanted to use that map in a game with smooth scroll that moves in increments of 2 pixels (1 pixel smooth scroll would be even harder!). In order to do that, what we need to do is this: 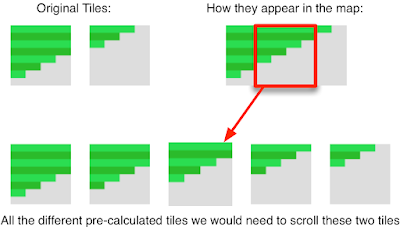 You can already see where this is going. If we want pre-calculated tiles for multidirectional scroll (even just for moving 2 pixels at a time, let alone pixel by pixel), we would need A LOT of tiles. If we remove duplicates (since lots of tiles generated with the previous method would look identical), here is the set of tiles we would need for the map above: 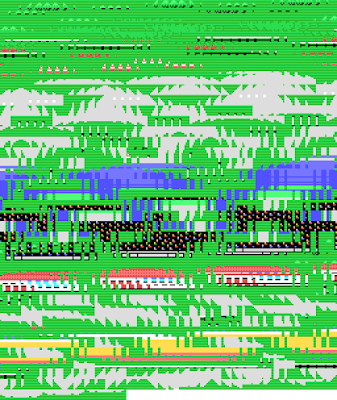 This is a total of 1196 tiles! And if we now create a separate map that has some unique tile combination not appearing in this map, we would then need even more tiles! Also, have in mind that I authored those tiles with this method in mind, so they are carefully drawn to minimize the number of tiles needed. Notice that all elements always have an even number of empty space surrounding them (for example the house has 4 empty pixels above (not 3, not 5), the cone has 2 empty pixels below, etc.). If you are not careful, you'd get even more tiles!

Now, in XRacing, I need the bottom part of the screen for a minimap, and some basic information about the game (speed, time, laps, car status, etc.). So, I only used the top two banks for the actual gameplay. Since maps scroll arbitrarily, I have the same tile set in each of the two banks. Thus, the maximum number of different tiles I can have loaded at once in the VDP is 256. This was clearly not going to work for XRacing :)

That is "just" 389 tiles! Still too many, but we are getting closer to the magical 256 number! So, in order to reduce this number further, I used the idea of "rails".

Rather than allow the track to freely scroll, I would define "rails" in the track, and the camera can ONLY slide along those rails. For example, in the track above, these are the defined rails: 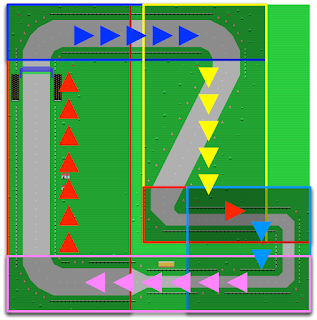 When the game starts, the player is in the left-most red-color rail, and thus the camera can only move vertically. As soon as the player reaches the top part of the map, the camera "snaps" to the horizontal blue-colored rail, and the camera can only move left-right, etc. The key idea is that not all tiles would need pre-calculated versions that scroll vertically or horizontally. For example, the little house in the tiles above was designed to only scroll vertically (there would be color clash if I scroll it horizontally!). So, I only add it to parts of the map associated with a vertical rail, and never to a horizontal rail. Likewise, there are graphics that I only ever associate with horizontal rails (like the yellow banner sign).

This reduces the set of tiles needed even further! I don't know how many tiles would I need for the map above, since I never calculated it. But when putting together ALL the XRacing maps that use this tile set, I only need 313 tiles, which is even closer to the 256 magic number! We are getting there!

The last trick is to realize that not all tiles are needed at all time. For example the starting block (the blue semaphore at the beginning of a track), only appears once in the track! So, I decided to divide my tiles into smaller groups, and load/unload them during the game. The constraint is that we cannot upload too many tiles at once, or the player would notice a slowdown in the scroll. So, what I did is to define a large group of "common tiles" that would always be loaded, and then smaller groups of tiles, of which only one of them at a time would be loaded, and each time we switch from one rail to another, the rail has a tag which which group of tiles it needs to load.

This part was a bit tricky, and I wrote a small optimization algorithm using a classic hill-climbing approach to find the optimal grouping of tiles. I struggled quite a lot with this part, since it was hard to find a good grouping, and my algorithm kept finding local optima that were not good. Happy to provide details if anyone wants to replicate any of this. But suffice to say that there is an algorithm that given a set of maps can find these groups of tiles (the idea is to start with one group per rail, and then take tiles out of those groups into a "common group", trying to take out the tiles that appear most often). These were the groups of tiles that were found for XRacing:

For the urban tile set, there was 4 smaller groups of tiles instead of 2, but that was also manageable. So, in a regular game frame, I only need to update the two banks of the name tables (512 bytes to the VDP), and when the scroll snaps from one rail to the next, we need to upload an additional 57 tiles (57*16 = 912 bytes). I need to upload those to both bank 1 and bank 2, so, it's twice that amount, but that was also manageable. The game runs at 25/30 frames per second, so this was well within the margins of what I could handle!

Another tricky part was that some times, my optimization algorithm was not able to find a solution to the problem using only 256 tiles, and thus I had to constantly change the maps if there was a particular combination of tiles that only appeared in one map, to reduce the number of tiles actually needed. This was a bit painful, but eventually I got a set of maps for which my optimization algorithm could find a good grouping solution, and thus I could use for the game!

Finally, in order to add a bit more graphic detail in the game, I use a collection of sprites in addition to tiles. In addition to the cars, and the small dots in the minimap, I use sprites in 3 different ways in XRacing: 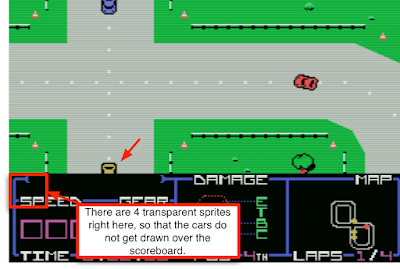 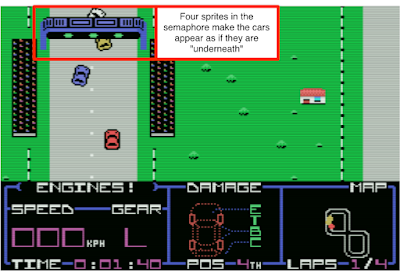 And that's basically it! So, the key question I wanted to answer was: can I take the "pre-calculated scrolled tiles" scrolling technique and push it so that I can increase graphic variety as much as possible? In order to do that I used the idea of "rails", which limit the number of tiles we need to pre-calculate and the idea of splitting the tiles into smaller groups that I can load/unload to the VDP at run time. This results in a scroll that is not fully multi-directional, but has the benefit of allowing me to have different graphics in the game (like the little houses, or trees, etc.) to decorate the map, which would not have been possible otherwise (look at the Lotus F3 example I pointed out above).

As a final note, once I made the game available, Artrag from the msx.org forums, pointed out to me that there is a way to push the VDP even further, and make the top two tile banks of the VDP share a single bank. In this way, we can have 2 banks of tiles, and switch from one to the other arbitrarily. So, to clarify: in XRacing the top part of the screen uses bank 1, and the middle bank 2. What Artrag is suggesting is that we can make both top and middle use bank 1, and then swap to bank 2 when we want. So, this would bring the number of total tiles we can have up to 512 (only 256 of them at once). I want to explore this possibility in my future games, so, it seems we have not yet found the "limits" of our beloved MSX computers! So, looking forward to better scrolling algorithms in the future! :)

Anyway, I hope you found this interesting, and if you have any different ideas or techniques to push the possibilities of doing smooth scroll in MSX games, I'd love to hear about them! :)