Although most of my recent games have been for the MSX, last year Jordi Sureda and myself started working together on a game for the Amstrad CPC. The game is a remake of the Dinamic classic Phantomas 2. You can see a full walk through here of the game by JGonza (who was one of the beta testers of the game):


The game itself can be downloaded from Github, and if you want a physical copy of the game, you can buy it from matranet. The game is not very complex technically, and it works well mostly thanks to the graphics (made by Jordi Sureda). But there are a few interesting technical aspects. One of them in particular I think is particularly interesting since it's something that has to be done in every 8 bit project: how compress data as much as possible.

A compression algorithm takes as input a sequence of symbols (say, of length n), and tries to generate another sequence of symbols of length smaller than n by exploiting regularities in the data. For example, if I have a sequence that is something like this "aaaaabbb", I could replace it by "5a3b", meaning that I have 5 times an "a", and then 3 times a "b". This is called "run length encoding", and works well when we are compressing sequences that have long sequences of repeated symbols. This was used in the classic PCX image format, popular in the Amiga and DOS times, where images contained usually large patches of the same color. The most common compression tool nowadays is the "zip" utility that comes with most OSs, which does use much more advanced compression than simple run length encoding (most modern compressors use dictionary-based approaches such as the LZW or DEFLATE algorithms).

These advanced compressors are usually too computationally intensive for 8 bit machines to handle, but there are tools, like Pletter (popular in the MSX world) or Exomizer (popular in the Amstrad CPC world), specifically designed for these machines. Usually, though, the way they are used is to have a compressor that runs on a modern PC to compress the data to fit it in a game, and then only the decompressor (which is not as computationally heavy) runs on the 8 bit machine.

For a comparison of how well these algorithms work, I refer you to an amazing empirical evaluation done by @newcoleco on the Atariage forums ( http://atariage.com/forums/topic/268244-data-compression-benchmark-dan-pletter-zx7-exomizer-pucrunch-megalz/ ). In summary: Exomizer compresses more, but decompression is much slower. So, if space is the biggest concern, use Exomizer, if decompression time is a concern (i.e., if you need to decompress things during gameplay), then Pletter is the better option.

For Phantomas 2.0, I considered both (for a few weeks I maintained two separate versions of the game using both compressors), but I ended deciding for Pletter, since Exomizer was too slow (it took about 4 seconds to decompress all the data I needed when changing rooms, which made the game unplayable). But in other games, Exomizer might be the best option. So, the important thing is to know your options!

Compressing the Rooms in Phantomas 2.0

There are many ways in which rooms can be defined in games. In Phantomas 2.0, we used a simple 2-plane grid-based approach: rooms are made out of 8x16 pixel tiles, and since the playable screen is 128x128 pixels wide (the game runs in Amstrad CPC mode 0, where pixels are twice as wide as tall) each room is 16x8 tiles in size. We used two planes, one for background tiles (drawn behind the player and enemies) and one for foreground tiles (drawn in front of the player and enemies). For example, here I show an example room, and the two planes it is made out of: 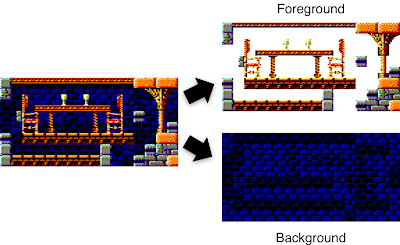 An option could have been going for the idea of macro tiles (used brilliantly in many of the productions by 4MHz). But macro tiles also have some limitations. So, since I did not want to impose any more restrictions on Jordi (who was creating the rooms), I decided I had to figure out a way to reduce space while maintaining this room representation. Of course, a first step is compressing them with Pletter. But there are 3 additional ideas that can be applied after that that can reduce space even more. So, let's get started!

A first idea is to just set all of those background tiles covered completely by a foreground tile to 0. But a much better idea is to set them to the same value as the tile immediately to the left of them. If we are on the left-most tile, then we use the last background tile in the row before, and if we are on the top-left coordinate, then we just use "0". In this way, we are setting several bytes in a row with the same value, which results in a sequence that compressors like Pletter can compress better.

With this small change, the result is that the rooms (after compressing them, one by one with Pletter) use now only 11850 bytes (139.31 per room). With this simple trick, we have saved almost 800 bytes! not bad!

Using that idea, the obvious thing to do is to just concatenate all the rooms, and compress the whole thing together, right? The problem with this is that you need to have enough space in RAM to decompress the rooms (recall they use 24316 bytes uncompressed). So, this was not an option. I know that some games (for example Operation Alexandra compressed the WHOLE game together!, but this was not an option for us, as the game does not fit in memory uncompressed :))

So, what we ended up doing is to compress the rooms by groups. We compressed rooms in groups of 4 (put 4 maps together, and then call Pletter to compress them). A little detail is that if you want good compression, you better place things that are similar together (as we saw above). So, I placed the background of all 4 maps together, then the foreground of the 4 maps, and then the item/enemy information.

With this idea, we get a significant reduction in space, and we are now at: 9926 bytes (116.18 bytes per room), which is already pretty good.

Some rooms look more similar to each other than some other rooms. So, I thought: if I put rooms that look similar in the same group when compressing them, would that save space? and the answer is yes! So, this is what I did: I wrote a program that first calculated the space needed when compressing all maps in groups of 4. Then, the program starts trying to permute maps (taking a map in a group and swapping it by a map in another group). After each swap, it recalculates the space, and if we have saved some space, then we keep the new grouping. Trying all possible map groupings is not feasible, but we can use a simple greedy search algorithm like this:
1) Start with the base grouping
2) Try every possible swap, if one reduces, keep it and continue from there
3) Once we have tried every possible swap, restart from the beginning again if we had any improvement, otherwise, terminate.

Here's a little diagram showing a summary of the different ideas: 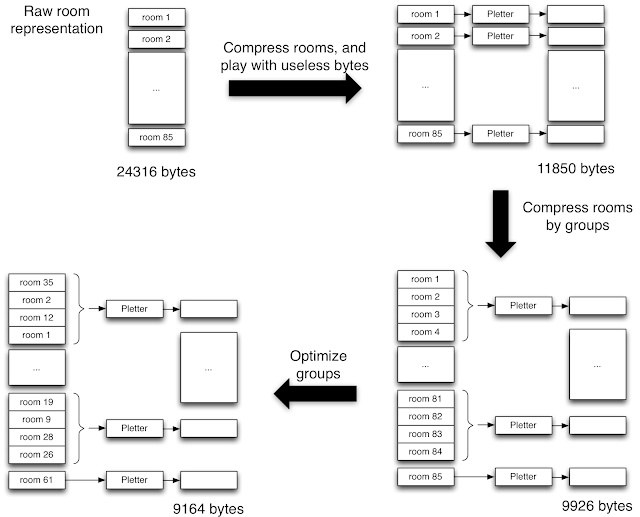 Since these ideas worked very well, I used the same idea to store all the graphics of the game (in groups of 16 tiles), saving additional space (again, all the tiles uncompressed do not fit in RAM, so, we need to keep them compressed, and we only uncompress those needed for the current room). If you play the game, you might notice a small delay when changing rooms, which is when the game decompresses the necessary tiles for the next room. This is the part that was way too slow using Exomizer unfortunately...

The funniest thing is that after all of this space saving, I got a message from @Joseman on twitter, explaining me some details of the Amstrad CPC hardware I wasn't aware of (this was our first CPC game), and it turns out there are 4 full KB of extra space we didn't use! So, at the end there was plenty of unused space in the computer memory. But oh well, it was fun optimization anyway, and these ideas can be useful for other projects!

And that's it, I hope these techniques are useful to somebody else! If you have any additional space compression tricks, by all means I would like to hear about them! :D
Posted by santi at 12:43 PM